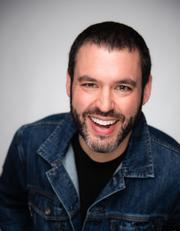 Since arriving in Cincinnati in 2013, Brant Russell has directed Macbeth, You’re Welcome, the workshop and subsequent full production of Very Dumb Kids, Romeo and Juliet, Love and Information, and Association of Controlled Dreamers at CCM. Other CCM projects include Boeing-Boeing (a co-production with The Carnegie) and The Hunchback of Seville (a co-production with Know Theatre). He is the founding artistic director of the CCM Playwrights Workshop, and the drama editor for The Cincinnati Review. For CCM Acting, he teaches Artist in Society, Script Analysis, History of Directing, and a graduate aesthetics seminar for designers. He also produces the annual TRANSMIGRATION Festival of student-devised work. He directed the world-premiere production of Darkest Night at the Gnarly Stump, the regional premiere of The Man-Beast, and the US premiere of In the Night Time (Before the Sun Rises) at the Know, where also appeared in the musical Whisper House.  His short plays have been performed here by the Cincinnati One-Minute Play Festival, and his play Bankers was workshopped at the Cincinnati Fringe Festival and was a semi-finalist for American Blues Theater's Blue Ink Playwriting award. He frequently collaborates with Queens Theatre in New York, where he has produced Park Plays and The World’s Fair Play Festival (New York Times Critic’s Pick), and directed The Miracle Worker and Barefoot in the Park - all four with many CCM alums. In 2019, Russell was Professeur Inviteé at Universiteé Bordeaux Montaigne.  He has worked with many companies in his home town of Chicago, including Theater 7, Strawdog, Next, Steep, Side Project, A Red Orchid, Collaboraction, Victory Gardens, Writers’ Theatre, Chicago Shakespeare Theater and Steppenwolf.  Proud member, SDC, AAUP, and Lincoln Center Directors' Lab.  www.brantrussell.com

2019 -To Present Associate Professor, University of Cincinnati College-Conservatory of Music,