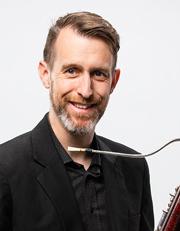 Christopher Sales joined the Cincinnati Symphony Orchestra as Principal Bassoonist in 2018, and has held Principal positions with the Calgary Philharmonic, Charleston Symphony, Norrkӧping Symphony and Jacksonville Symphony Orchestras. Described as "fleet-fingered and nimble" by the Calgary Herald, Sales has showcased his virtuosity in concerto performances with the Calgary Philharmonic Orchestra, Charleston Symphony, as well as the Aspen and Eastern Music Festivals.

Sales has performed numerous solo and chamber music recitals at such institutions as the Juilliard School, CCM, Florida State University, the Instrumental Society of Calgary and the University of Calgary, among others.

Sales studied with William Winstead and Martin James at CCM, and with Whitney Crockett at the Juilliard School. Other major teachers include Per Hannevold, Nancy Goeres and Russell Hinkle.