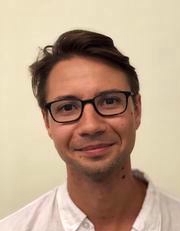 Calloway Scott (PhD, NYU 2017) is a historian of ancient Greece. His research is informed by an interest in the entanglements of science and society. Inspired by turns in medical history and medical anthropology, his current book-project examines the ways health and disease were conceived of and experienced as biological, social, and political phenomena in antiquity. It makes the case that “health” furnished a key conceptual tool for performing interpersonal relations and civic cohesion alike, taking as evidence technical treatises, material culture, and the rich remains of Classical Greek healing cults. Among other things, he is interested in the historical uses (and abuses) of the Hippocratic Corpus; cultural perceptions of heredity; and divination, epistemology, and institutionalism in the Mediterranean. He has published in leading journals and is a regular contributor to Synapsis, a public-facing project in support of the medical humanities. He has taught courses on ancient religion and magic, Graeco-Roman medicine, and dreams in the ancient and modern world. Full CV at https://uc.academia.edu/CallowayScott