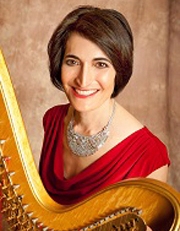 Gillian Benet Sella has been the Principal Harpist of the Cincinnati Symphony Orchestra since 1995; formerly, she was Principal Harpist of the Israel Philharmonic and the Kennedy Center Opera Orchestra. She has performed as soloist with the Cincinnati Symphony, Israel Philharmonic, Radio Prague Symphony, Cincinnati Chamber, Quebec Symphony and the Kennedy Center Opera House Orchestras among others. In 1997 she premiered the Liebermann Concerto for Harp and Flute with flutist James Galway and the Cincinnati Symphony Orchestra. Sella made her Carnegie Hall solo recital debut in Weill Recital Hall (presented by Artist’s International) and gave a harp and flute recital for the Mostly Mozart Festival in Avery Fisher Hall. She has performed solos at the World Harp Congress in Vienna, Paris and Prague and was a concerto soloist at the American Harp Society National Conferences in Cincinnati and San Francisco.

Sella graduated cum laude from Harvard University where she studied French Civilization. She has Masters and Doctoral degrees from The Juilliard School, a Concert Artist’s Diploma from the Royal Conservatory of Toronto and the Diplôme de Concertiste from the Ecole Normale de Paris. She has performed at Tanglewood, Wolf Trap, Festival Estival de Paris, Chautauqua, Ravinia and Kfar Blum Festivals. In 2013 she performed and taught as faculty of the Aspen Music Festival. The World Harp Congress Review has published her articles entitled “The Debussy Danses” and “L'Après-midi d'un Faune.” Sella’s solo and chamber recordings include the Tailleferre Harp Concertino with the Women's Philharmonic (on Koch Records), Debussy’s Sonata for Flute, Viola and Harp (Koch), Jolivet’s Chant de Linos(Koch), Jongen’s Concert à Cinq with the Atlantic Sinfonietta (Koch), and Tan Dun's In Distance for harp, piccolo and bass drum (CRI).