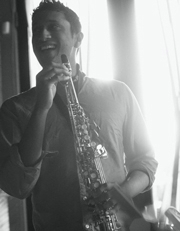 Om Srivastava, DMA, is a saxophonist and educator passionate about contemporary and world music. Srivastava has performed throughout the United States and abroad including featured performances with the Kokomo and Ball State Symphony Orchestras, as well as with the BSU Jazz Ensemble's tour of China. He has been an active performer in the festivals of the Chautauqua Institute in Chautauqua, New York, the New Harmony Music Festival and the Covington World Music Fest.

As a chamber musician, Srivastava was named a finalist in the International Coleman Chamber Music Competition (2013) and semi-finalist in the North American Saxophone Alliance Competition (2016). In 2013 he released the album Through Adam's Fall with the Promethean Quartet and in 2017 he released his solo debut Antara comprised of Indian fusion music for saxophone and tabla. He was awarded a 2015 IndianRaga fellowship and was named a Fellow at the 2017 Cortona Sessions for New Music in Tuscany, Italy.

Recent performances include performing alongside Tony Award winner Matthew Morrison with the Lexington Pops Orchestra, Grammy nominated guitarist Fareed Haque at the Lincoln Center and with the RagaTone Ensemble at Joe's Pub in New York City. Srivastava holds a cognate in ethnomusicology from CCM were he focused on classical North Indian music and tabla, studying under Stefan Fiol and Jim Feist. His saxophone instructors include Larry Kirkman, George Wolfe, James Bunte and Nathan Nabb.