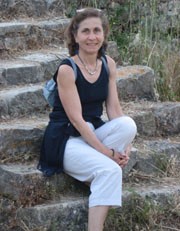 Sharon is a professional archaeologist who has participated in excavations in Greece and Albania.  She directs the publications program for UC excavations at the Palace of Nestor in Greece.  She has served as co-director of archaeological surveys in the hinterlands of the Greek colonies of Epidamnus and Apollonia in Albania and of excavations at a recently discovered Greek sanctuary near Apollonia.  Since 2011, she has represented the University of Cincinnati at the Palace of Nestor in excavations conducted in collaboration with the Greek Ministry of Culture.
Sharon's full CV.

Greek prehistory, particularly the Middle Bronze Age; Archaeology of the Adriatic area and Greek colonization in the western Mediterranean.