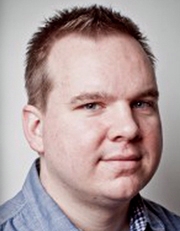 A sound designer with experience in live performance, film and advertising, Matthew Tibbs’ nearly 100 sound designs have been seen on stages nationally, including in New York City, Washington DC, Chicago, Cincinnati, Salt Lake City and Portland. His film work has been seen at national and international film festivals and his advertising work has been distributed on the West Coast in local and regional TV markets.

An experienced educator, Tibbs most recently served on the faculty of Ball State University’s Department of Theatre and Dance. He previously spent three years as Resident Sound Designer for the Pioneer Theatre Company and served as an adjunct faculty member at the University of Utah. He has also taught as visiting faculty at Pacific University and as a graduate assistant at CCM.

Tibbs is a member of the designers’ union United Scenic Artists Local 829 and serves as a secretary for the Theatrical Sound Designers and Composers Association (TSDCA).

He holds a MFA in Sound Design from CCM (2007) and a BA in Communication Arts from George Fox University (2004).