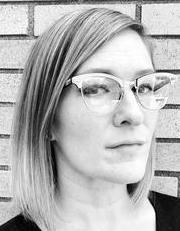 Jenny Roesel Ustick is Associate Professor and Foundations Coordinator in the School of Art. She is one of the most prominent muralists in the region, having worked with nonprofits and independently, including murals around the U.S., and projects stemming from residencies in Argentina and Italy. Ustick has an extensive exhibition record ranging from local to international, showing solo and collaborative studio work. She presents regularly about her teaching and art practice at national conferences including CAA, FATE, and SECAC. She has published essays in curated and peer-reviewed publications, has been reviewed in American Quarterly, and interviewed by Yale University Radio. Other mentions include publications such as Hyperallergic, Juxtapoz, the Huffington Post, and Forbes.

(2014. ) Book of Poems and Drawings for Peace and Justice, Cincinnati, OH

(02-2011. ) The U-Turn Folios, (includes a photograph by Denise Burge and Jenny Ustick of Maidens of the Cosmic Body Running),

(12-2015. ) Between the Discursive and the Immersive: A Symposium on Research in 21st Century Art Museums .Copenhagen, Denmark.

-2004 Presenter to the Ohio Board of Regents Represented the School of Art, DAAP, University of Cincinnati

2013 -To Present: Foundations in Art: Theory and Practice (FATE), Member

2013 -To Present: Spring In Our Steps, Board of Directors