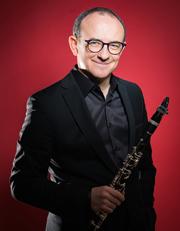 A native of Ukraine and Israel who has called the US home for the last 20 years, Pavel Vinnitsky has gained international acclaim through numerous solo, chamber music and orchestral appearances at major concert venues around the world and is recognized as one of the most in demand clarinet performers and sought after teachers in the US.

In high demand as a chamber musician, Vinnitsky has been featured in performances with the Chamber Music Society of Lincoln Center, the New York Philharmonic chamber music series and the Met Chamber Players at Carnegie Hall, as well as with the Wind Soloists of New York, the St. Luke’s Chamber Ensemble and the International Contemporary Ensemble. He is also on the artists roster of many international chamber music festivals. Together with his wife, concert pianist and composer Anna Vinnitsky, he toured internationally, presenting innovative programs of the standard and original music for clarinet and piano ensemble.

Vinnitsky can be heard on soundtracks for motion picture features produced by Warner Brothers, Universal Studios, Paramount Studios, Disney and 20th Century Fox, as well as TV series on Netflix and Amazon. He has collaborated in performances and recording projects with a number of rock and pop music stars including Sting, Lady Gaga, Tony Bennett, Paul McCartney and Peter Gabriel.

An established educator, Vinnitsky actively appears in master classes at universities and music schools nationwide, including Juilliard and Yale School of Music. He has served on the faculty of New York University (2013-22) and currently teaches at the Interlochen Summer Clarinet Institute.

Now an American citizen, Vinnitsky began his music education in his home country Ukraine where he studied clarinet with Boris Fisherman. In 1990 his family immigrated to Israel. There he attended Tel Aviv University studying under Professor Richard Lesser while performing with Youth Israel Philharmonic and touring extensively as a member of a klezmer trio. In 2003 he was accepted into the studio of David Shifrin at the Yale University School of Music and upon finishing his Master of Music degree moved to New York City and made United States his home.