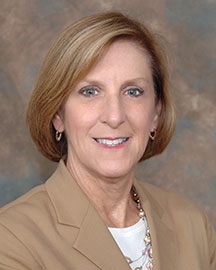 Tina Forsythe Whalen, EdD, DPT, MPA, FASAHP, FNAP has been a licensed physical therapist since 1979. She previously served in the roles of department chair for Rehabilitation Sciences and Associate Dean of Academic Affairs for 9 years before assuming the role of Dean of the University of Cincinnati’s College of Allied Health Sciences in 2014.

Dr. Whalen is a past chair of the UC Council of Deans and served on the university’s Strategic Budget Committee. Through her guidance as dean, the college initiated a 5-year strategic plan, has raised over $6.65 million in philanthropic contributions, primarily for student scholarship, and has grown research expenditures to $4.93 million over the last five years. Additionally, under Dr. Whalen’s leadership, the number of diverse faculty and staff has grown 72%, the college has launched 4 new graduate programs, and the college enrollment has grown to over 3,200 students. She championed a new home for the college in the Academic Health Center with the construction of the Health Sciences Building, which was completed in 2019.

In recognition of her long-standing commitment to interprofessional education and practice, she was inducted as a Fellow in the National Academies of Practice. Dr. Whalen is an active member in the ASAHP Midwest Deans Group and serves on the Midwest Deans Scholarship Review Committee. She has participated in ASAHP since 2012 and has chaired the ASAHP Leadership Development Committee since 2019.

2012 -To Present Professor with Tenure, University of Cincinnati College of Allied Health Sciences,