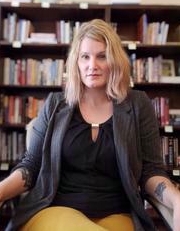 Rebecca S. Wingo's research centers on the long nineteenth century with a focus on the Indigenous and American West. Her most recent co-authored book (with Richard Edwards and Jacob K. Friefeld), Homesteading the Plains: Toward a New History (University of Nebraska Press, 2017), won the 2018 Nebraska Book Prize for Nonfiction.

She is working on two other books. Her current monograph, Housing the Crows: Adult Indian Education and Cultural Conflict, chronicles the Crow Nation's engagement with American empire-building in the assimilation era. Just as government and missionary schools were key sites of assimilation for indigenous children, houses were key sites of cultural contestations and education for adults. Her work on federal documents, ethnographic sources, and a unique cache of photographic collections suggests that the introduction of frame housing on the Crow Reservation was not just part of some material shortage; rather, it attempted to restructure the relationships the Crows had to the house, to the land, and to each other.

She also specializes in digital and public history, particularly examining tools that empower citizen scholars and aid them in co-creation of history. Her second manuscript in progress, Digital Community Engagement: Partnering Communities with the Academy, is a co-edited volume (with Jason Heppler and Paul Schadewald) that seeks to establish a series of best practices for community engagement. They use promising examples of projects that emerged through the creative engagement of academic faculty, staff, and students with community partners in an effort to illustrate some of benefits and challenges in successful projects.

Rebecca S. Wingo (2018. ) "'This is All the Home I Now Have:' Deserted and Widowed Nebraska Homesteaders" .Rural Women's Studies Association Blog,

This is All the Home I Now Have

What Do Digital Historians Want?

Remembering Rondo: An Inside View of the History Harvest